The move that decided the outcome of the match was a typical north African football ploy – a quick exchange of passes in the middle followed by a deep, probing ball behind the full-back to the sprinting, wide player. The ball played into the box did not appear to have much venom. Goalkeeper Blackwell Chalwe positioned himself to take it at the near post. Some fans even looked away, a routine ball to be handled without concern.

Later, Chalwe was the first to take responsibility. There was no divot on the pristine pitch to blame for the mishap. The ball bounced out of his hands, came off his body and, to the horror of the watching Power Dynamos fans, rolled into the back of the net, 1-0. Arab Contractors had taken the lead through their prolific striker Nasser Mohamed Ali.

In response, Power Dynamos stepped up a gear. Peter Kaumba tore down the left relentlessly. Down the opposite flank, Lucky Msiska jinked, turned, and twisted, seeking to get past the full back. The midfield master Alex Chola left several Arab Contractors players in his wake as he mesmerised them with unbelievable ball skills. 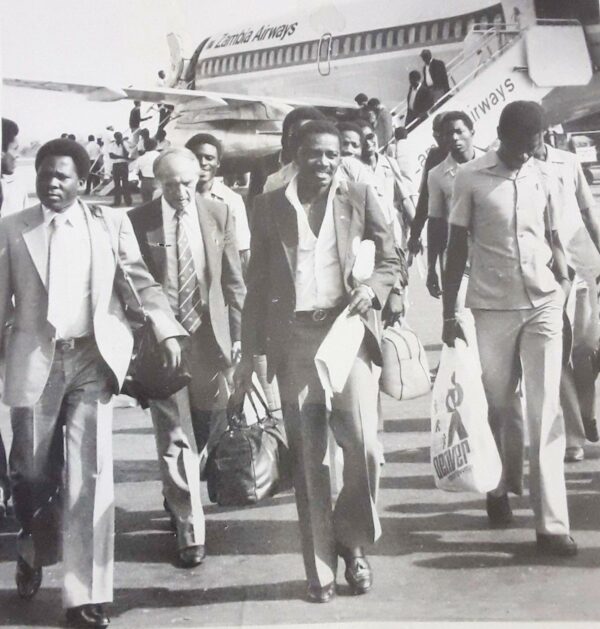 Power Dynamos on arrival from Mali – 1982

It was not to be. A second by Nabil Ibrahim effectively put the outcome beyond doubt, 2-0. The defeat at home proved insurmountable. Arab Contractors won by a similar score line in front of 60,000 fans at the Cairo Stadium for a 4-0 aggregate score and were crowned the 1982 African Cup Winners Cup champions.

For Power Dynamos, even in defeat it was a remarkable feat just to get to the final. The Club had only spent four years of its 11-year life in league football after its formation in 1971. They had rapidly risen through the ranks to become the flagbearer for Zambian football, becoming the first-ever Zambian team to reach the final of a continental cup.

To get there, they had begun their race against Ugandan club, Coffee United FC. A 0-0 draw in the first leg gave them the opportunity to finish off their opponents at home and they did so, winning the second leg comfortably, 2-0.

In the second round, they met another East African side in Tanzania’s Pan African FC. The Tanzanians proved to be made of sterner stuff than the Ugandans, winning 1-0 at home. A difficult second leg saw Power Dynamos also win by a single goal, forcing the match to a penalty shoot-out. Dynamos prevailed, 5-3.

In the quarter final, Zimbabwean side, CAPS United, were next. A 2-1 win on the road gave Dynamos pole position for the second leg and a 3-1 home win was enough to comfortably see them through to the semi-final.

The penultimate match was a close affair against a dangerous Djoliba FC team from Mali. Bustling and physically strong, a typical west African team, they scored an away goal, leaving Power Dynamos to travel to Bamako with the narrowest of leads, 2-1. The Malian team fought relentlessly to get the single goal necessary to qualify on the away goal rule, but Power Dynamos stood firm with Michael Musonda, Francis Mutembo, Edwin Kanyanta and Joseph Mwewa resolute at the back. The result put them through to the final against their Egyptian opponents.

The Confederation of African Football’s insistence that the match be played in Lusaka would take away the spirit of the compact Arthur Davies Stadium and negate the advantage of the home team’s vociferous support, a factor some players believe played a part in their subsequent loss in Lusaka. 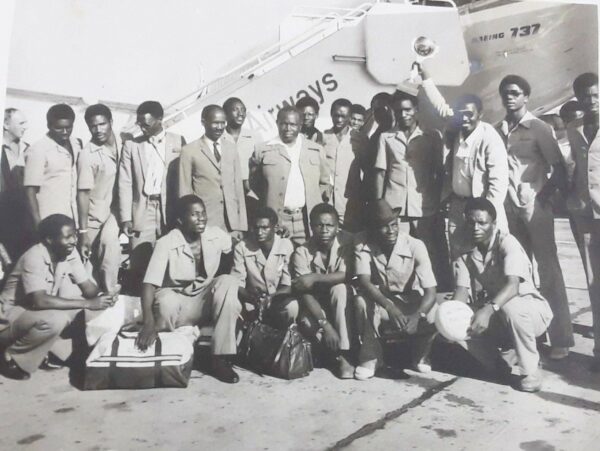 The Power Dynamos success in the African Cup Winners Cup saw them earn an invitation to the Rothmans Cup staged a year later in 1983 in Abidjan, Cote d’Ivoire. The experiences of the 1982 Africa Cup Winners Cup had turned the team into experienced Africa campaigners and they proved their worth by winning the one-and-only Rothmans Cup tournament as the shift in worldwide policy against smoking led to an end of the sponsorship shortly after.

After the loss to Arab Contractors, the next eight years would see the team come close to another final but come short on several occasions.

In 1991, after a great 1990 season in which they had taken three domestic cup titles and come runner-up in the league, they again got to the final of the Cup Winners Cup – renamed the Nelson Mandela Cup by CAF following the release of the great South African from a 27-year spell in prison at the hands of South Africa’s apartheid regime. 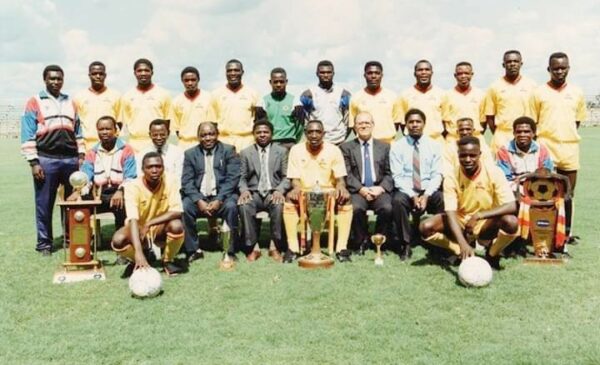 After several years playing together, Power Dynamos had gelled into a solid unit that complemented each other well. They were led by one of the few survivors from the 1982 team, Wisdom Chansa, whose leadership on the pitch was an invaluable and key factor in the team getting thus far.

The arrival of Jim Bone from Scotland had strengthened a coaching team of Freddie Mwila, the long-serving coach who had had a spell in Botswana in-between. Mwila was also assigned the role of keeping an eye on Dynamos’ opponents, travelling extensively to provide tactical insights that proved vital to the cause. Alex Chola, now retired as a player but making his mark as a coach, was also instrumental. The coaching team was reinforced by Clement ‘Soweto’ Banda, the former Kabwe Warriors player who had seamlessly fitted into the Dynamos set up.

The first round began with what would turn out to be the most fascinating match of the qualifying round against Kenyan club, Rivatex. The match would go down in Power Dynamos folklore as one of the greatest fight backs. A Rivatex away-goal saw Chansa lead a revival by restoring confidence to the team covering every blade of grass on the pitch and restoring Dynamos’ dominance through sheer personal effort. The 1-0 first leg deficit was overturned by a memorable 4-2 win at Arthur Davies Stadium.

The next stage of the competition saw Dynamos win 2-1 at home against Sudan’s Al-Ittihad. The tough second leg in difficult desert-like temperatures required the team to dig deep and battle out a 2-0 away win that proved the resoluteness of a team with a mission. The blend of experience and youth, with Chansa, Edwin Katongo and Linos Makwaza providing the experience, while Winter Mumba, Douglas Mwamba and Kenan Simambe’s youthful exuberance provided pace and energy to the mix, gave the team the perfect balance.

The quarter-final again needed Dynamos to show their mettle on the road and in Cotonou, Benin, they fought out a 1-1 draw with ASFA Yennega. The Beninois side stood their ground in Kitwe but Dynamos had done enough to go through on the away goal rule.

Only Inter Star of Burundi now stood between Power Dynamos and a place in the final. They had earned their place thus far by eliminating Power Dynamos’ nemesis, Arab Contractors, in the quarter final. A 2-1 win in Kitwe followed by a 2-2 draw in Bujumbura was enough to return a jubilant Dynamos team to a second African Cup Winners Cup final in the club’s history.

The final pitted them against Nigeria’s BCC Lions, victors over Algeria’s Entente Setif in their semi-final. In front of 40,000 hostile fans at the now-derelict Surelere Stadium, the home side fought without respite to dominate, but Power Dynamos were in battle-mode once again and each time the Lions scored, fought back valiantly with Wedson Nyirenda and Linos Makwaza equalising. Five minutes from time, however, the prolific John Zaki scored the winner for a slender 3-2 win.

The final was again directed to Independence Stadium in Lusaka by CAF. ZCCM Power Division General Manager Frederick Bantubonse assigned club executive Bill Dow to Lusaka to ensure that Dynamos would play on a pitch equivalent to their lush Arthur Davies surface. Dow and his team spent a full month working feverishly and it paid off. The magnificent home team – in all-yellow, with red trim – marched out to a three quarter-filled stadium.

There were horror memories of 1982 when Webby Chilufya’s sliced clearance ended up in his own net as a hushed crowd stared in disbelief. BCC Lions’ aggregate score increased to 4-2. Undaunted, Dynamos rose to the challenge. Again, Chansa rallied his troops and they responded magnificently.

Robert Watiyakeni pulled one back after a characteristic foray forward, 1-1. Richard ‘Sharp’ Sikanyika got the second to give Dynamos a 2-1 lead, now putting them ahead on the away goal rule with a 4-4 aggregate score. With the clock running down and the Lions pushing forward more in search of a vital goal, they were caught on a counter-attack. A ferocious Wedson Nyirenda shot sealed their fate, making it 3-1 on the day and 5-4 on aggregate. Power Dynamos were African Champions.

As Wisdom Chansa lifted the trophy, history was made. A team born only two decades ago from the vision of a handful of men proved that limitations only exist in the minds of man. The Zambian flag flew at the summit of African football.

In becoming the first Zambian team to win a continental title, Power Dynamos set a standard that no other Zambian club has been able to match and look increasingly unlikely to. As the team celebrated its victory at the post-match party at Pamodzi Hotel, Wedson Nyirenda, scorer of the third and final goal that sealed BCC Lions’ fate, ordered a bottle of red wine. When asked, by the waiter, who would pay the bill as it wasn’t among the complimentary drinks, he confidently declared that the club officials would, saying, ‘after all, if it wasn’t for us, the players, there would be no function here!’