A year since Wukwashi Wa Nzambi was gifted with an indelible experience, driving through its gates still evokes memories of the euphoria that characterised the monumental event, despite the stark difference between the throng of crowds with voices raised in jubilation then and the easy quiet now.

In the play park, the only observable movement comes from swings swaying to the early summer breeze. Inside, the Centre, a place that would normally be buzzing with activity, is unusually quiet arising from the suspension of school activities due to the COVID-19 pandemic especially that children with special needs, such as those catered to at Wukwashi Wa Nzambi, are pretty vulnerable to disease contraction.

“They depend on others to access their daily needs. Some cannot feed, dress, bath or do other activities for daily living, including mobility, by themselves. Some need to be placed and pushed on wheelchairs while the blind need a guide. Others cannot even wear a face mask because of their breathing challenges. So, if the person caring for them has COVID-19, they can easily contract it,” advises the Wukwashi Wa Nzambi Director, Mrs. Joyce Mutembu.

Wukwashi Wa Nzambi (Wukwashi) is a community-based rehabilitation centre for children with physical, learning and social disabilities which include club feet, cleft lip, cerebral palsy and many others. The name is derived from the Lunda language, native to Zambia’s North-Western Province and means “God’s Help”.

Located on the horizon of Kitwe’s Chimwemwe township Wukwashi has, in its 15 years of existence, provided life-changing services to its immediate community and beyond despite being hampered by shoe-string financing, inadequate infrastructure and material requisites; even something as basic as water supply.

Through a fortuitous turn of events, the charity found itself on CEC’s radar in 2017. The Company celebrated its 20th anniversary with the children and family of Wukwashi – sharing love, warmth, mobility aids (wheelchairs), office and kitchen equipment and an assortment of consumables. This marked the beginning of a relationship that has culminated into a true experience of transforming investment both ways.

“The passion to positively affect the lives of children with special needs, who are often paid little attention by society, coupled with the selflessness of the team managing the organisation made for a very genuine story of courage and inspiration that moved CEC to provide more support to Wukwashi,” said Senior Manager, Corporate Communication and Investor Relations, Ms. Chama Nsabika.

“When CEC reached out to Wukwashi and invited us to celebrate their 20th anniversary with them, the Wukwashi team felt special and honoured as this was not expected. We asked ourselves, “Out of the many charities in Zambia, why was Wukwashi considered and picked?” recalls, Mrs. Mutembu.

True to its word and commitment to provide more support with long lasting impact to the charity, CEC set to work in 2018 and on 18 June 2019 presented to Wukwashi three new classrooms, three completed and upgraded classrooms that were incomplete prior to the start of the project; a physiotherapy room, an administration block and ablution facilities, classroom and office furniture, physiotherapy equipment, as well as recreation facilities such as the play park and provision of other requisites.

“When the project was finally done and the facility handed over, the Wukwashi team including the children and parents were excited as it was a dream come true, something unbelievable,” Mrs. Mutembu said.

The First Lady of the Republic of Zambia, Mrs. Esther Lungu, was present at the handover event and took gifts of her own. Herself, a passionate advocate for the rights of children and desirous to see every child enjoy all the joys and privileges of childhood and not being denied their rights because of any inability, Mrs. Lungu called on society to embrace differently challenged children and not see them as cause for negativity, embarrassment and even shame.

“Put clearly, I know for a fact that whenever a child is born with what society perceives as an imperfection, the common reaction of most parents is guilt, blame, shame and other negative emotions, to the extent that some of these lovely children are hidden away from the world. I am here to tell you that these children, different as they may be from others, are to be loved and enjoyed,” the First Lady counselled.

Mrs. Lungu described Wukwashi Wa Nzambi as a place that the children would look forward to be every day, to not only meet friends, play and learn, but because they knew they were accepted without question despite the differences between them and other children and it was a safe place for them to be free, away from their homes.

Since the upgrade, Wukwashi has accomplished much; including the endorsement by three government ministries – the Ministry of General Education, Ministry of Health and Ministry of Community Development, as a facility conducive to render educational and medical services to children with special needs.

In the one year following this infrastructure and facilities build, Wukwashi’s school enrolment has doubled from 21 to 40 children. Additionally, the Center has been able to enrol over 50 children to receive physiotherapy and other therapeutic services once a week, something not possible before the facility was upgraded. 45 children and an equal number of parents and guardians drawn from Chambishi, Kalulushi and Chingola, who cannot access education, have been given training, enabled by the new facilities. The children were trained in activities for daily living such as feeding, toilet use, extensive physiotherapy and the importance of play and interaction with others

The improved facility has certainly motivated the volunteers that work with the children for their all-round development. The availability of equipment for physiotherapy and a spacious room has made work enjoyable and easier. With a fully furnished staffroom, members of staff now have a conducive space to plan their work, hold meetings and relax between lessons and activities.

To ameliorate what had become a perennial shortage of water, CEC installed a water reticulation system consisting of a borehole and water tank to provide steady water supply.

“The supply of water is helping in many more ways than washing, cooking and drinking. We are also maintaining our own garden, which is helping to supplement the food for children and volunteers at the Centre. This has helped to cut down on the cost of buying food especially vegetables. We also sell some of the produce and derive income, which further supplements our other needs.”

The play park is invaluable to the development of the children as recreation is necessary for the physical and mental growth of young ones. As children play, they use their bodies and work out what they have to do using their mental abilities. They also experience laughter, which is cardinal to the healing process.

The heightened visibility that has arisen from CEC’s investment of more than K1 million in the Centre, the First Lady’s involvement through the Esther Lungu Foundation Trust who’ve twice, after the handover, visited and rendered different support as well as the recognition and endorsement of various government ministries and departments has had tangible results as more parents/guardians have taken their children and had them enrolled into school or support groups. Community members also are helping to identify children needing of such support and directing their families to Wukwashi for assistance.

Wukwashi undertakes outreach programmes in 14 communities. Over 700 hundred children have been provided with medical, education, social and spiritual support.

Needless to state what a big step this towards attaining a societal attitude that does not stigmatize differently abled people because stigma, according to Mrs. Mutembu, has been the biggest barrier to children accessing education and medical care.

“It starts from their homes then into the community. Now with the improved visibility of the organisation and its work, we have members of the community volunteering their time to help with children and even to keep the surroundings clean and neat. Several donations of food and various requisites have also been received from organisations and individuals.”

Her exuberance at making the acquaintance of the First Lady and interacting with her was an honour she felt belonged to the children and team of selfless volunteers that daily work for the children. She remains grateful that the First Lady has continued her continued support to the charity long after the commissioning of the facility.

“It was the first time we were meeting the First Lady and the support she rendered to us even after the official handing over of facility has gone a long way in improving lives of children in many ways. For example, the wheelchairs are still being used, easing mobility for them and their families, the food stuff lasted for over six months for the school children and staff members, hence, reducing the cost of feeding.”

Mrs. Mutembu believes that CEC has a genuine passion for humanity and specifically, for vulnerable children; concerned about their wellbeing and future rather than just fulfilling some corporate social responsibility action.

“CEC demonstrates the heart of a parent.” 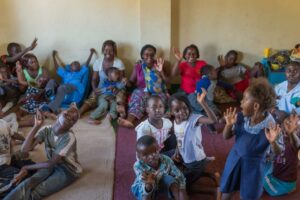 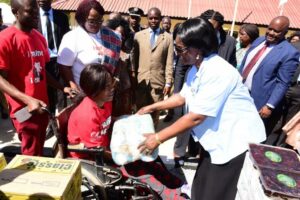 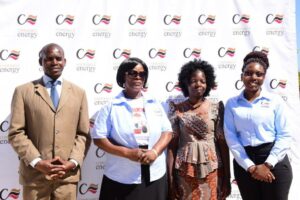 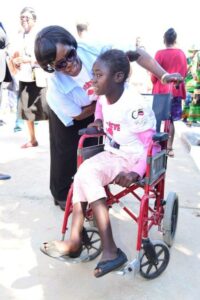 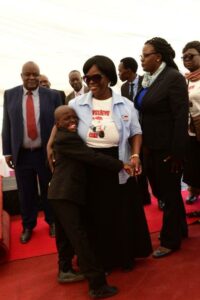